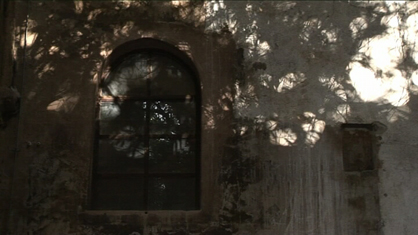 Watercolour is a video painting from Williams’ series Transitory Sites, which explores the boundary between the built and natural environment. The series of works presents this boundary as a tense and fragile equilibrium between the two competing forces which encourages the viewer to consider the long term ephemerality of the built environment. Seemingly solid structures are poised, balanced and submerged within landscapes that existed long before them and will be there long after.

Whilst commentators claim each technological advance as a sign of our mastery over nature, Williams succeeds in delicately portraying the natural world as a patient, steady and unyieldingly permanent force. The absence of human inhabitation saturates the works adding to the forlorn drama of these forgotten spaces and allowing the slow and quiet battle between leaf and lintel, sea and stone to play out in isolation.

“My video painting practice for Open Gallery is an opportunity for me to explore the richness of architecture, focusing on buildings that through habitation have a voice, which communicates history and memory, both real and imagined. Looking at temporary visual imprints such as light, shadow, nature and people, I examine contrasts between solid and fluid, stillness and movement and surface and depth.” Alys Williams, 2008

Alys Williams (b. London 1979) is a multimedia artist. Her work draws from the relationship between architecture and narrative, investigating the poetic qualities of the places we inhabit and constructing dialogues from past and present encounters with these surroundings.

She graduated from Camberwell College of Arts with a BA Visual Arts: Sculpture in 2002 and went on to gain a MA Scenography at Central Saint Martins College of Art in 2004. Between 2005 and 2007, she moved to Italy, which influenced much of her video works. She is now based in London.

Williams is also a curator and in 2010 set up the contemporary art space Vitrine Gallery, for which she is creative director. She has also curated the major video prize and exhibition The Open Prize for two years with Open Gallery and worked on a number of other independent projects.

Williams’ Transitory Sites Video Painting series is represented by Open Gallery, a London gallery dedicated to the video painting series: a new form of video art that began with a philosophy. http://www.opengallery.co.uk