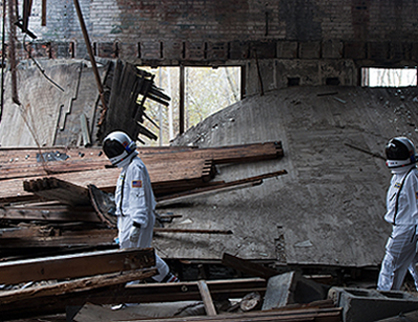 “Mission: Cleveland Land Mass,” is a wry commentary on the amount of abandoned land in the city of Cleveland. Using 3-D technology the artists urge viewers to experience the obvious, the familiar and the ignored through the distorted lens of the camera.

When Neil Armstrong landed on the moon in 1969 the world viewed the incomprehensible from their living rooms. In “Mission: Cleveland Land Mass” we are reenacting ‘first steps’ in a visual exploration of Cleveland’s abandoned land.

The portrayal of these post-industrial landscapes is homage to Marx’s idea of alienation; they bring forth the consequences of abstraction; the unforeseen destruction we cause to our environment as a result of our separation from the results of our own production.

Arzu Ozkal is a Turkish born media artist and designer. Her practice engages with different interpretations of the body and its relationship to the environment. She raises questions about dogmas, traditions, laws, and patriarchal value systems through videos, public interventions and performances. Ozkal received her MFA from the Department of Visual Studies at University at Buffalo (SUNY) and BFA from Bilkent University.

Her work has been exhibited broadly in exhibitions and festivals nationally and internationally. Prior to joining San Diego State University as Assistant Professor of Graphic Design in Fall 2011, she spent three years on the faculty in the Art Department at Oberlin College teaching new media practices.

Nanette Yannuzzi was born in El Paso, Texas. Her work is comprised of actions, deliberations, collaborations, and writings that respond or dialog with the social, personal and political machinations of the everyday.

She received her MFA from The University of California, San Diego, during which time she was also a fellow at the Whitney Museum Independent Study Program. She received her BFA from The Cooper Union School of Art. She has exhibited nationally and internationally. She is based in Oberlin, Ohio where teaches at Oberlin College & Conservatory.