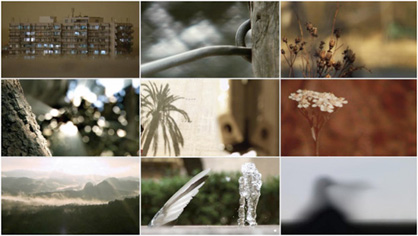 The video album DING summarizes video works by Alec Crichton from the years 2003-2006. On a conceptual level the album deals with the idea that an artistic practice tends to serve a more unifying than differentiating function, where established symbols and traditional ways of perceiving and understanding may be confused. This effect may be called ‘poetic’ or ‘surreal’ whenever it strengthens an internal unity, where all elements of a work refer to each other, enabling an aesthetic or emotional form of sense, without requiring another significant meaning or an external source for understanding.

Alec Crichton is a British Cologne based artist, writer and curator. He received his masters at the Academy of media arts in 2008, where he is working on his thesis, titled “Paradise function”. He progressively releases his work at http://www.crichton.tv. Since 2008 he is an active partner of Souvenirs from Earth, the first TV Channel for Film and Video arts on the European Cable Network.