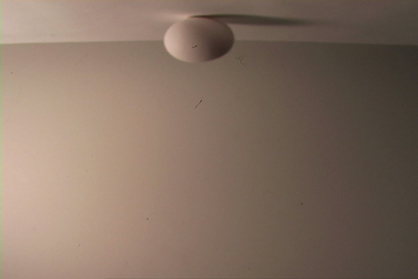 “In a world which really is topsy-turvy, the true is a moment of the false.”

Guy Debord
Chapter I: “Separation Perfected”
Society of the Spectacle

Playing off of Guy Debord’s theoretical writings as well as the Surrealist use of détournement (“turnabout”), Separation Perfected pairs slow-motion upside-down visuals with a backward audio track (Miserere mei Deus by Allegri) in order to generate a sense of a disoriented world. Debord’s notion of ‘separation perfected’ relates to his theory of life as an “immense accumulation of spectacles” in which humanity is excluded from direct, lived experience. In this video, the egg (plucked magically like an apple from a tree) combined with the backward chanting is meant to accentuate the unreal, pseudo-sacred nature of the video medium.

Karen Bondarchuk, a native of Canada, received her MFA in sculpture from The Ohio State University in Columbus, Ohio, and her BFA in sculpture and video from the Nova Scotia College of Art and Design (NSCAD) in Halifax, Nova Scotia. She is an assistant professor and foundation coordinator in the Frostic School of Art at Western Michigan University. Her artwork is varied – including sculpture, kinetics, bookmaking drawing, video and performance – and is conceptually driven, visually diverse and often humorous. She has shown her art in the United States, Canada, Italy and England, and her work is in the permanent collection of the National Gallery of Canada and other private collections.

One thought on “Day 8 | Karen Bondarchuk”