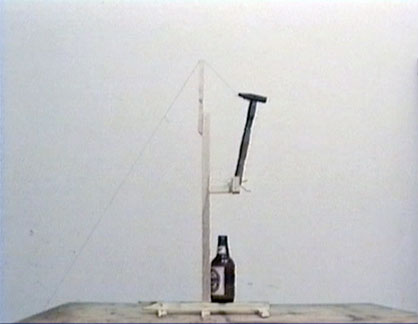 THE WHITE WALL
Films (logical mind games) are based on different assumptions where the title contains a thesis and the contents of the film itself provides a proof of the assumption. They question the existing systems of values and point to the relations between the motivation for activity, the activity itself, and its result.

Films are a result of experiments, carried out on commonly accepted ideas. Ideas presented in a different context, questioned, and challenged, change their ascribed meaning. And then, absurd comes in. Absurd which is not a nonsense but rather is a meeting of two ore more true statements. Results in contradiction, which may become a new entity.

Igor Krenz lives and works in Warsaw, Poland. He is a co-founder of “Photo Service” and “Azorro” groups, art collectives that perform and circulate images. He has made over 60 films that have been presented at the Centre for Contemporary Art and Raster Gallery in Warsaw, GB Agency in Paris and Tate Modern in London.